It doesn’t look like my feet have touched the ground since my last blog; I now feel that I am writing from Finland…..

I am, I hasten to add writing this off the back of being given a copy of The Defenceless by the same author courtesy of Orenda Books to review. I quickly determined that for my peace of mind I needed to go back to the beginning and read The Hummingbird before getting too involved in the plot of the sequel.

I don’t regret it one bit! It’s a thrilling read and I hear the sequel is even better.  I would counsel reading books in order. 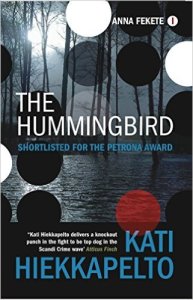 In Kati’s work I’ve met yet another character at the start of a set of Nordic crime thrillers in Anna Fekete. She has already got under my skin like a lot of my other police heroes and heroines.

Anna, as we learn over time, is a Serbian-Hungarian immigrant who has lived in Finland since coming over with her family to escape the war in Yugoslavia. She is working at her first job as detective constable. She has returned to her adopted home town where her brother and their old friends live.

Instead of being tasked with the mundane she is plunged into a high-pressure environment in the violent crimes unit. The team starts investigating the murder of a jogger – shot beyond facial recognition on the forest paths in late summer.  Anna not only has to deal with the investigation – she is also a habitual jogger now reluctant to go out so she resorts to the kind of exercise I subscribe to – a cigarette and a beer!  Her brother isn’t helping her situation as he hasn’t acclimatised to Finland as well as she has.

Her new colleagues are a mixed group too; a racially-bigoted, alcoholic and chain-smoking guy to whom she is assigned as partner – he is unkind and intolerant, a woman who keeps receiving anonymous and threatening text-messages – as does Anna, and the other male on the team who doesn’t like going home as his marriage is falling apart.

There is a sub-plot which wraps around the main murder investigation about a muslim honour situation trigged by an emergency call from a teenage girl.

Then, when another jogger is shot with a similar modus operandi it gives them a clue to the fact that a serial killer is on the loose.  A love triangle is introduced into the plot amongst the suspects and hence a motive.  Anna’s own promiscuity and morals are brought into question which contrast with the ‘above and beyond’ follow-up she demonstrates against orders on the honour case!

It’s only when a third jogger is shot, do the pieces start to all come together in this gripping and exciting police procedural. This very well written narrative devotes valuable time to the cultural social and economic issues around migrants in Finland, paralleled I think today in a lot of EU countries; in fact as I was reading and am now writing the Syrian exodus is playing out across our European states and the politics is getting very interesting.

The other facet of this book that I very much like is that it reminds me of Arne Dahl’s A-Unit books, in how the narrative is seen from the perspective of some of the other key police players and not just from Anna’s side. I like multiple layers as it spreads the story and adds intrigue!

I may have also learnt some Hungarian expletives – I doubt I can pronounce them though.😜

I won’t tell but there is a thrilling twist when a not so obvious culprit is charged, but you’ll have to get the book and read it because I DONT do spoilers. I like to think I do TEASERS!

By way of teaser I have the sequel The Defenceless and am already hooked. Later today I get to meet the writer. I hope she likes my review!

It was my great pleasure and honour to meet Kati in Portsmouth at Blackwell‘s on September 8 with Orenda Books on a whistle-stop tour before Gunnar Staalesen and Kati Hiekkapelto wend their way to Bloody Scotland via a UK mini-tour. Thanks to all involved for a great evening!

watching and waving at the world with a wicked word sometimes a wise one! View all posts by tonk5ey