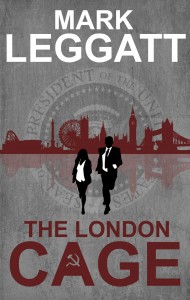 As quite often happens a publisher – in this case Fledgling Press drops me a line and asks me to read and review a book before it’s release.  In this case it is The London Cage by Mark Leggatt. As with all the books I receive my first move is to check if there is one before. I was correct and in this case The Names of the Dead was published previously so being cheeky I asked the publisher for a copy of that book and it duly arrived in the post.

So who is Connor Montrose? Described in some reviews as Bond meets Bourne meets Indiana Jones – there is some truth in this in comparison as the pace of the plots is similar. The real Connor Montrose is a CIA IT Technician who has gone rogue because he was digging where he shouldn’t and found out about aircraft flights that no one should know about when he is trying to find out what has happened to his sister. The irony of this is to keep him out of trouble he is posted to Interpol in Europe, where he gets into more trouble.

Names of the Dead

The CIA want Connor dead! “Shoot on sight with extreme prejudice” are  words expressed to ensure he cant speak. He gets tangled up in a plot to extract gold and millions of dollars hidden since the second world war. This involves him being permanently on the run.

Connor survives, as one would expect, but only by being one step ahead of the CIA with the help of a new ’employer’ and a side-kick called Kirsty.

We find him in a bar in London with an ear-piece watching proceedings between some Russian guys and some one selling photographs. The ear-piece is allowing him to communicate with Kirsty who is a hacker of the Lisbeth Salander standard.

Kirsty is an interesting character in her own right as you’ll find out she knows the rat-runs and back ways in London. She knows how to spot a Victorian lamppost that isn’t a lamppost at all but carries a bank of CCTV.

Connor and Kirsty are in the middle of a cat and mouse game; the CIA and MI5 are after them and narrowly escaping capture or being shot as in this story MI5 and the metropolitan police are US poodles doing what and when they told.

They are helped by a mysterious character called Pilgrim the brother of a character introduced and who dies in the prologue set 30 years in the past. The circumstances of his demise slowly unravel as the plot unveils a threat of nuclear war and Armageddon in the middle east unfolds with the Russians and Kirsty with her back-office genius Zac in the background competing to decipher codes taken from a photograph of the dead man when his body is recovered at the bottom of an glacier.

The plot comes to the explosive ending when the clues lead them to Whitechapel and the arches, a house with a supposed and disgraced double agent just before he gets killed. They do solve the problem, but Kirsty and Connor have to be chameleons in the watched-world that is 21st century London, with containment zones closing around them they change appearance, clothes and use devious means of transport to get where they need to go.

The London Cage is an excellent follow-up to Names of the Dead from Mark Leggatt and I can highly recommend it if you like a page-turning thriller non-stop tension, jumping from one close-call to another only escaping from each one in sometimes the most unlikely and fluky situations. in the Connor Montrose you never know who is on your side or who you can trust and how much they have to hide.

The Names of the Dead is on Amazon in ebook format.

The London Cage is publish on June 29th, 2016 on Amazon in paperback.

Linda MacFadyen at Fledgling Press for my review copies.

watching and waving at the world with a wicked word sometimes a wise one! View all posts by tonk5ey