If you were wondering where I’ve been or more what I have been reading, I’ve been on a mission .. I’ve found a new author for whom I am queuing up the books like there’s no tomorrow. I’ve just binged on eight books about Jack Lapsley Parlabane and I loved every one of them as they’re funny and they get better and better …..

so truthfully I’d started to read Be My Enemy but put it down I guess because I didn’t know who Jack was from Adam and didn’t really care that much about him as a character so and I didn’t go back to BME until I came to it in the series; anyway I started again and by the end of Quite Ugly I was hooked; a new character I could bring into my literary life; wondering what would become of Jack…

Quite Ugly One Morning

Yeah, yeah, the usual. A crime. A corpse. A killer. Heard it. Except this stiff happens to be a Ponsonby, scion of a venerable Edinburgh medical clan, and the manner of his death speaks of unspeakable things. Why is the body displayed like a slice of beef? How come his hands are digitally challenged? And if it’s not the corpse, what is that awful smell?

A post-Thatcherite nightmare of frightening plausibility, QUITE UGLY ONE MORNING is a wickedly entertaining and vivacious thriller, full of acerbic wit, cracking dialogue and villains both reputed and shell-suited. Credit Amazon buy it here…..

Jack is one hell of a journalist – pre Levenson he is always a little bit over the thin blue line but that’s what makes him and his investigations much more interesting than the usual crime yarns that I write about.  He solves the most unusual of conspiracy theories in his endeavours to get a good headline.

Let’s rewind; I read Places in the Darkness and enjoyed the plot,  the characterisation and the setting. Just add no sign of Jack in this one but it opened my eyes to the writer. I like his style; the descriptive passages and from what I know with hind-sight not what I would have expected when I started on the Jack books…

Places in the Darkness 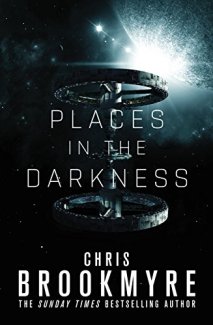 “This is as close to a city without crime as mankind has ever seen.”
Ciudad de Cielo is the ‘city in the sky’, a space station where hundreds of scientists and engineers work in earth’s orbit, building the colony ship that will one day take humanity to the stars.
When a mutilated body is found on the CdC, the eyes of the world are watching. Top-of the-class investigator, Alice Blake, is sent from Earth to team up with CdC’s Freeman – a jaded cop with more reason than most to distrust such planetside interference.
As the death toll climbs and factions aboard the station become more and more fractious, Freeman and Blake will discover clues to a conspiracy that threatens not only their own lives, but the future of humanity itself. Credit Amazon buy it here….

So then I saw Chris had a new novel out and went for it immediately – I read it in two days- page turning stuff completely different from what I’d expected and a couple of interesting twists….. but you can only find out if you read it! NO SPOILERS

Note: This is not a Jack novel but it is hot on conspiracy – it’s not Scotland nor is it outer-space. It is however and excellent

To new nanny Amanda, the Temple family seem to have it all: the former actress; the famous professor; their three successful grown-up children. But like any family, beneath the smiles and hugs there lurks far darker emotions.

Sixteen years earlier, little Niamh Temple died while they were on holiday in Portugal. Now, as Amanda joins the family for a reunion at their seaside villa, she begins to suspect one of them might be hiding something terrible…

And suspicion is a dangerous thing.

So in conclusion Brookmyre isn’t just a one trick pony; he’s prolific winning awards for Jack stories like Black Widow I like his writing and so I’ve ordered the first of the Angelique de Xavia novels to see how these play out….

A Big Boy Did It and Ran Away

Also there is a great wiki page Wikipedia