I have travelled very swiftly from Sweden to fictional Norway with my next read. If you are following me, I haven’t actually moved anywhere far as I am still at home with my feet-up, and you will know my back-story.

I won’t labour the point other than to say – I am typing again with both hands!

So I have now read We Shall Inherit the Wind by Gunnar Staalesen. 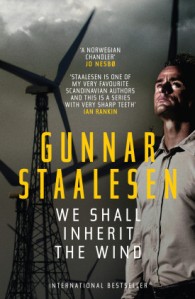 Varg is a PI in the Chandler style. The story is written entirely from his perspective as he follows-up on the apparent disappearance of his girlfriend’s (Karin) friend’s husband, Mons. The book actually starts in intensive care where his girlfriend is in a coma, we are then hooked into the what happened and what will be the outcome.

The plot then rewinds to the case. The plot sees Varg travel to and from a remote, picturesque, bleak, rugged, wild, run-down and fictional coastal region of Norway in search of the missing man. Varg’s motive is to dig into where the storyline is primarily set near the site of a disputed potential wind-farm. It is while he is there that the plot explodes in dramatic circumstances.

In the course of his digging, Varg meets Mon’s two grown-up children from his first-wife. These now adult children are on opposing sides of the dispute.

From there he starts to unwind a ‘cold-case’ involving the man’s first wife’s disappearance – apparently by drowning many years ago. He gets entangled, as the plot develops, with the business interests that want (or do they?) the wind-farm to be built, the eco-terrorists, local religious fanatics, curtain twitching local gossip-mongers, local ex-police and current Bergen police. Varg is known to the Bergen police by reputation as at one point as they finish talking one of them says “catch you later Varg” which I found amusing in the darkness of this very good Nordic-noir novel.

I enjoyed how the tensions between on one-hand the unearthed family conflicts, the past and present are entwined and the ecological and layered economical conflicts; I am intrigued to read more about Varg and probably need to get some more books from Staalesen. I think my fiancee may hit the roof when I next get back from a book-shop as the pile will yet again grow quicker than I can reduce it.

I found the style different from my other recent reads but when I look back on the other authors I’ve read Mankell and Nesbo most of their work is written from the main character’s perspective so not a difficult transition.

The story does achieve closure on all fronts; there are clues to the culprits if you look for them – whodunnit? – I won’t say other than to highly recommend the book. Please read it and then you’ll find out.

My literary flight from Malmo to Bergen comes courtesy of Karen Sullivan at Orenda Books. My thanks for the opportunity to discover a writer of great pedigree of who, prior to this, I had not heard of.

Gunnar’s fame in his native Norway is legendary – as you will see from the link there are twelve films about the ‘Wolf’ in the stories Varg Veum.

It was my great pleasure and honour to meet Gunnar in Portsmouth at Blackwell‘s on September 8 with Orenda Books on a whistle-stop tour before he and Kati Hiekkapelto wend their way to Bloody Scotland via a UK mini-tour. Thanks to all involved for a great evening!

I am now reading The Defenceless by Kati Hiekkapelto and will be writing about that in due course.